✓ Spearheaded a successful campaign to prepare a petition for the International Trade Commission requesting relief from unfair competition from imported crab meat.

✓ Launched a campaign to  conduct a review of the Department of Natural Resource's (DNR) policy which prohibited study of the Pacific oyster Crassastrea ariakensis in Maryland Waters.

✓ Conducted an economic impact study of the effect of  DNR's proposed regulation prohibiting possession of sponge crabs after July 1st;

✓ Initiated a study to find ways to make our seafood businesses more competitive;

✓Spearheaded an ongoing campaign to find a solution to the fluid H2-B guest worker legislation that is causing a chronic shortage of workers in the industry;

✓ Sponsored an analysis of the correlation between  reported Maryland crab harvests over the past twenty years and the crab population as reported by the Maryland Department of Natural Resources.  The report  shows the inconsistency that exists between the DNR’s harvest regulations and the conservation goals promoted by DNR. the guest workers and the industry. 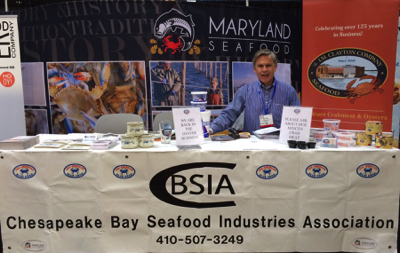